You are here: Home

This weekend Jack came over for a game, usually, we have 4-6 players but holiday time kept the numbers down, so jack said ACW and the armies where 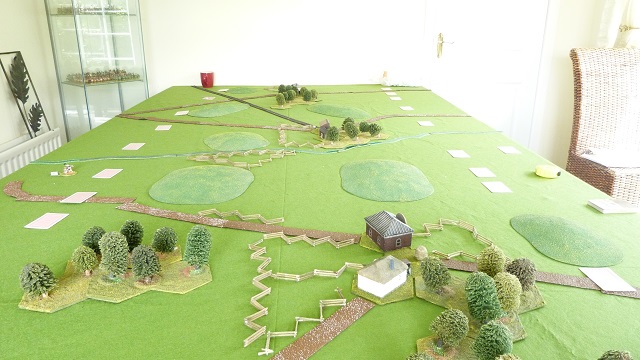 We deploy by using a deck of cards each card referring to a brigade and a random number of blanks, these are deployed – it saves times and also bad maps face down

Movement for any card is by the C in C die and movement is on cards at infantry speed, at anytime you can turn a card to use the commanders rating and faster( cavalry) movement but the troops have to be deployed

Once cards come within 24 inches they have to be revealed

The objective was to drive away the enemy and keep control of the railway junction, the premise being the Union want to use this spur to extend the line for supplies to the main army, the Confederates want to drive the union off destroy the Junction and railway, hopefully making the main union army retreat due to supply problems 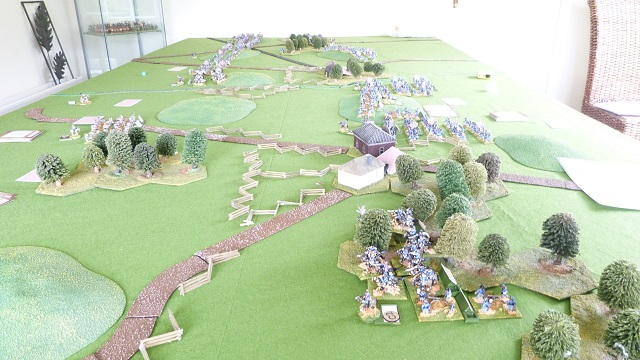 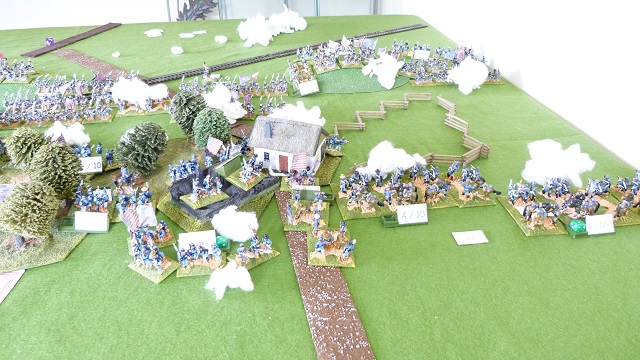 The Confederates( Jack) split his army on the Confederate right 2 brigades of Infantry and the Artillery reserve to the left of the stream he placed cavalry Brigade 1, and on the left his remaining 3 brigades of infantry. As you will see one cavalry brigade never appeared for the Confederates, I never noticed but in the heat of battle jack must have removed it as a blank in error

The armies are very even the commanders threw and the rating was 12+1 for the C in Cs for both the brigadiers where a smattering of 10, 12 and 12+1 for both sides.

The Union had the edge in quality of Artillery whereas the Cavalry and Infantry for the Confederates had a decidedly strong advantage over the Union.

The battle began with all cards on the table and the Union got the first move and quickly headed on the Right towards the wood and Right had village although brigade 6 declined its initial move on the Union left the columns advanced on the objectives, after further into the deck the union pulled a second move card and Brigade 5 arrived at the wood on the Union right and took hold of the village, brigade 6 making up for its late start swept toward the hill its objective and the supporting cavalry brigade on the extreme right arrived and the Fencing next to the village and Brigade 5 and dismounted, on the Union left the central hill was occupied by the Artillery reserve and the infantry 1-4 swept up in support the extreme left cavalry brigade advanced through a wood to dismount. 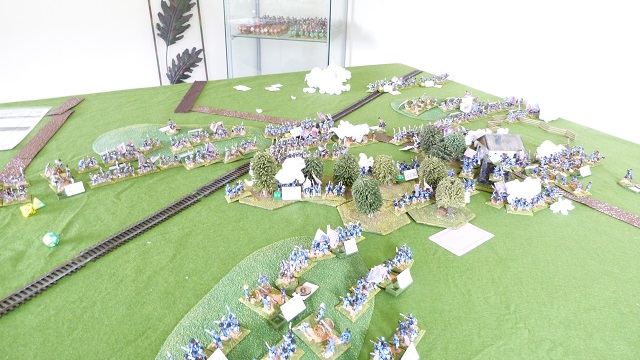 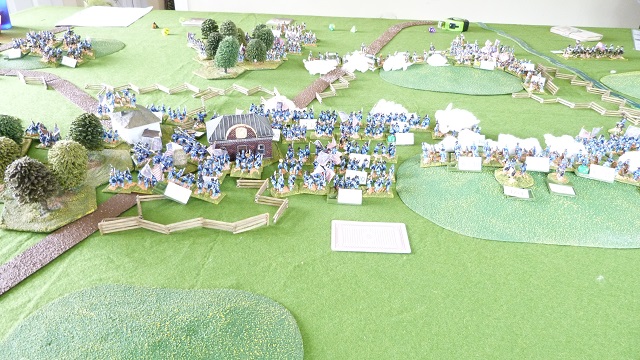 Jack thought we would end up playing on his side of the table as the union settled into its positions, soon the Confederate cards started to move with 2 brigades on the Confederate left marching straight for the woods and Union 5th Brigade, the cavalry in the centre swept over the hill toward the Village and the grand battery/Union artillery battery opened up and inflicted severe casualties, 2 hits each and driving one unit back in disarray also at this time over the hill to the front of the Union Artillery on the ridge appeared the 3rd Confederate brigade led by the Louisianan Tigers and Pelicans, the Confederate Artillery reserve deploying next to them with 8 batteries controlling the valley and others with the infantry brigades this was about to get bloody. 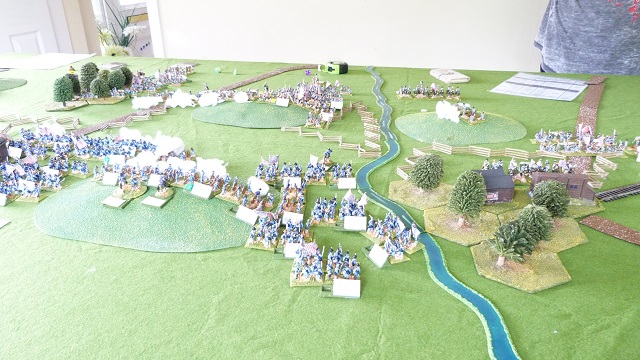 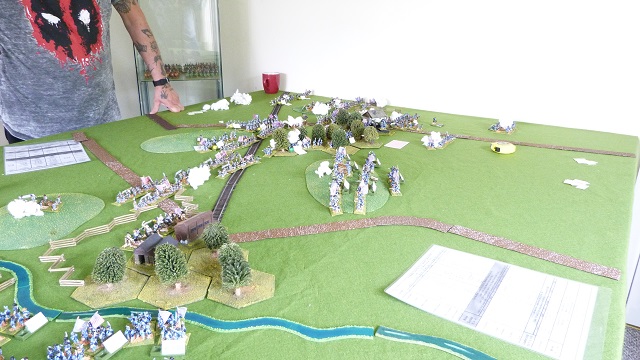 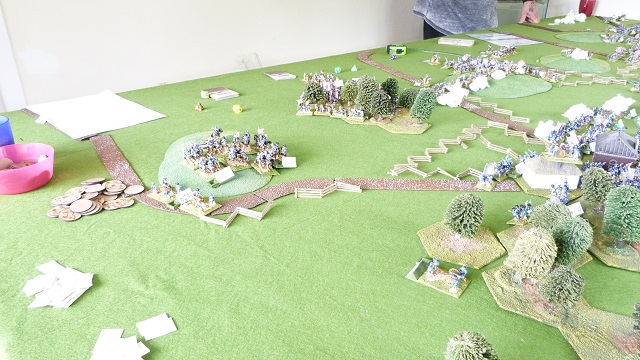 A little more manoeuvring led to all but a few blank cards of hidden troops and the Confederate Attack going in the Confederate left as it attacked the Union cavalry and the 5th Brigade, with an almighty volley two of the leading Confederate units Routed and 3 where pushed back, not a good start but it got worse the ragged volley back inflicted a few casualties but broke a unit in 5th Brigade. The Confederate cavalry swept into the railway junction but one battered unit got there the other, pushed back awaiting an opportunity to recover but the Artillery from the Cavalry brigade deployed to put more fire into the Valley of death. Licking its wounds Confederate infantry running for the baseline, the union turned a fire card and 5th Brigade and the Union 2nd cavalry brigade poured another volley into the Confederate line and two more units ran for the baseline. Although the downside was uncovering the Confederate second line and one of the Dismounted cavalry taking to its heels – as this was the best-dismounted cavalry unit for the Union this was a eeek moment, also fire from the Confederates in front of 5th Brigade and another Confederate brigade to their left caused several push backs – the 5th was buckling. 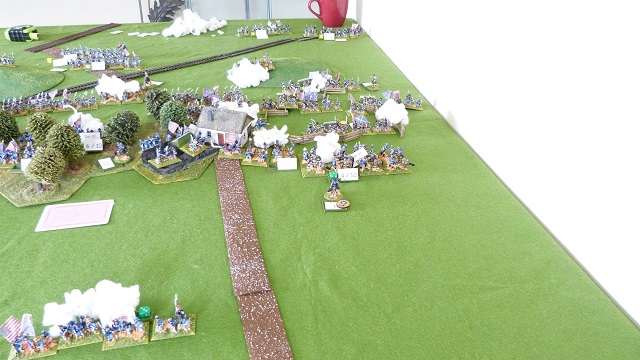 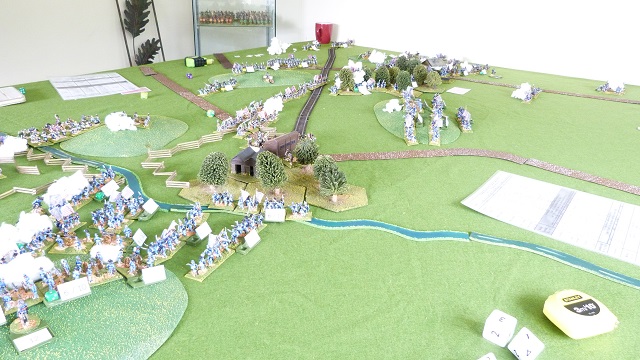 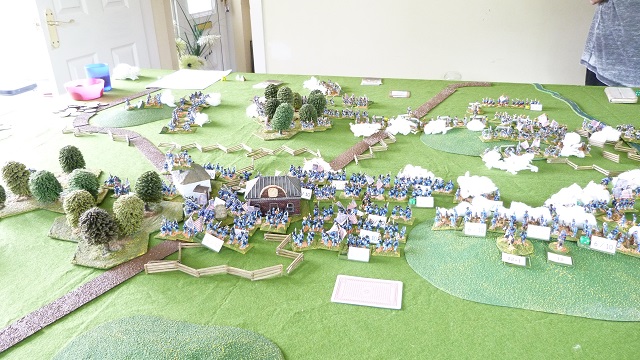 On the Union right the Confederates attacked the village and were repulsed, in the woods the union second rank fed in to strengthen the line as pressure mounted and the fire gradually drove the Union 5the brigade back but it bent and didn't break. The confederate now trying to turn 5th brigade engaged Union brigade 6 on the hill just to the south and initially drove back part of the brigade.

The cavalry on the Union right had only one unit holding the fence line a raw 4/10 unit and storming into view came an elite 10/12 and his friends although I didn't know that as our accessories don't let the unit ID be seen, luckily the Confederates desperate to clear away the cavalry didn't fire they charged with a rebel yell and they where in and the unit looked doomed, but a good die result led to the cavalry being pushed back with one casualty and out of command but the Confederate unit also out of command – well done.

In the centre, the Confederate commander ordered the remaining 4 units to assault and off it went and against all, the artillery fire( most missing) it broke two units of Union infantry and continued to fight toward the gun line.

Now it was getting desperate for the Confederates on their left the advance had been too slow and on their right, the Union cavalry had pushed past the flank. But desperate times make a commander take risks, on the left of the Confederate line saw the Union infantry ejected from half the village and 5th Brigade almost pushed out of the Wood, the Confederate assault on the cavalry brigade saw another melee and another push back, followed by the union deploying the brigade artillery in support of the cavalry only to see it silenced immediately and another melee with the dismounts seeing these raw troops wiped out, in the Confederate centre Brigade 3 shot up the artillery reserve battery destroying one of the 4 batteries and the Union Artillery praying for a fire card. On the Confederate right the brigade holding that was under attack from 2 union Infantry brigades and a brigade of cavalry. 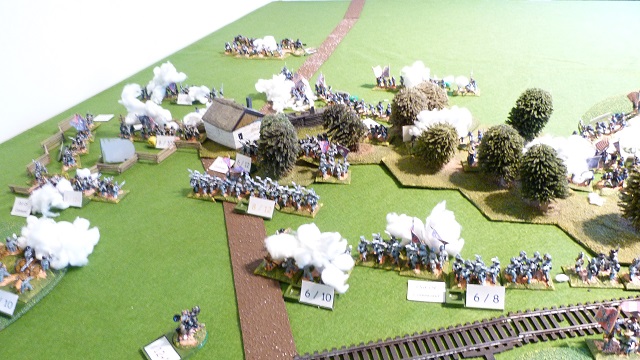 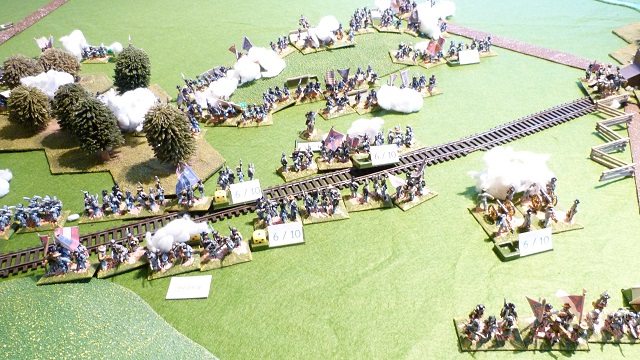 The next series of cards see the Confederate high mark on the Confederate right they engage with the Cavalry brigade and with two supporting batteries panic the Dismounted cavalry and they flee leaving the Artillery battery alone in the centre the 3rd Brigade advances, in the face of two more brigade batteries coming into play and got to within an inch of the Union artillery reserve on the left they take the last section of village pushing a Union unit out. On the Union side 5th Brigade rallied its broken unit and formed the third line, 5th brigade threw in its last fresh unit to push back two Confederate units, the Right wing Union cavalry unit rallied and the Union 6th Brigade attacked and broke two of the opposite confederate brigade, the Union Infantry surged forward and broke several Confederate units, and eventually the artillery card appeared for the Union and so ended the confederate 3rd Brigades advance so close but not close enough the brigade with only 2 units left not routed and with the Confederate right and left with more broken units than steady with the Confederate general on the extreme left being killed with no tokens in the Confederate bowl and adding to the Union tally we called it to for the Confederates to limp home. 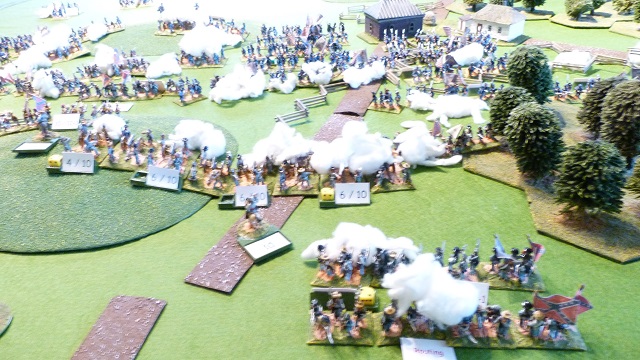 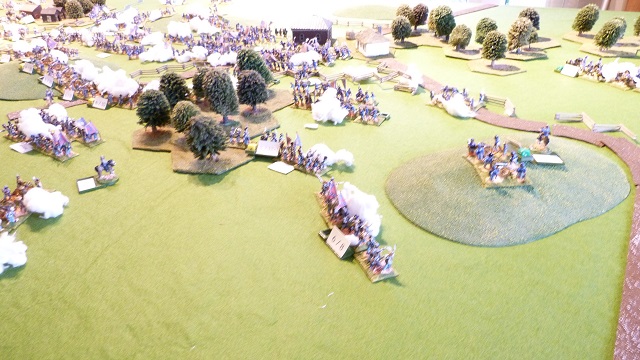 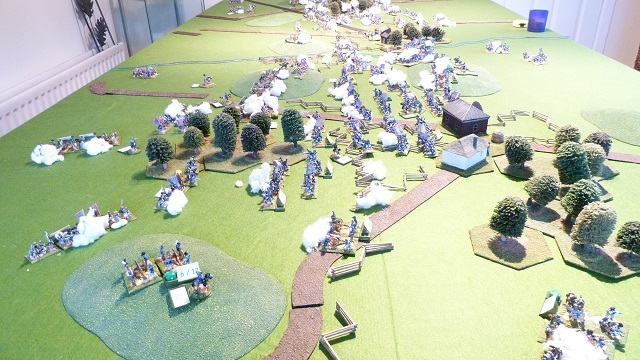 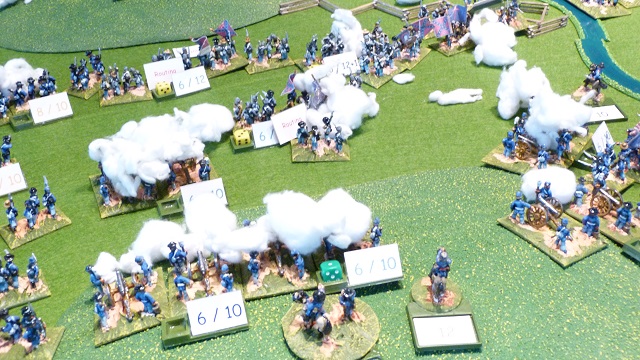 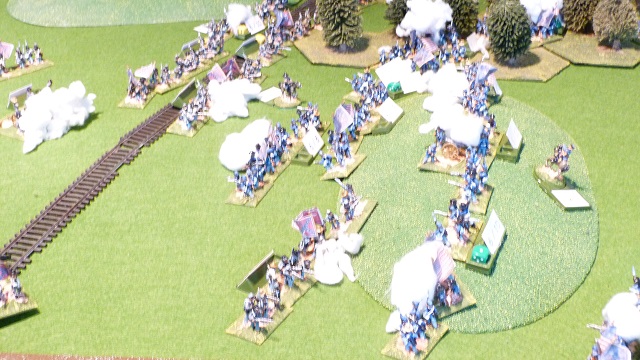 The heroes on the Confederate side definitely 3rd brigade under fire from artillery, infantry and killing the Union 3rd brigade commander it nearly achieved its superhuman target, unfortunately behind the hill and thus behind the Artillery was the Union 1st Brigade ready and waiting for these brave men, on the Union side it has to be 5th Brigade not only did it fight against twice as many confederate infantry but at the end all its units had rallied and although losing the village it still clung to the woods, bloody and having routed 4-6 units of confederates, also sterling service the artillery battery of the 5th Silenced, was assaulted by a battered( 2 casualties) confederate unit who sought to destroy it, alas our gunners had a surprise and pushed them back

The game lasted around 5-6 hours and was engrossing a thoroughly enjoyable game, even better when a plan works and you win