You are here: Home

Below two shots of the table 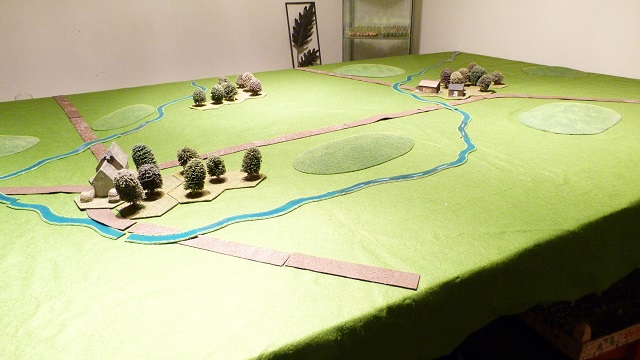 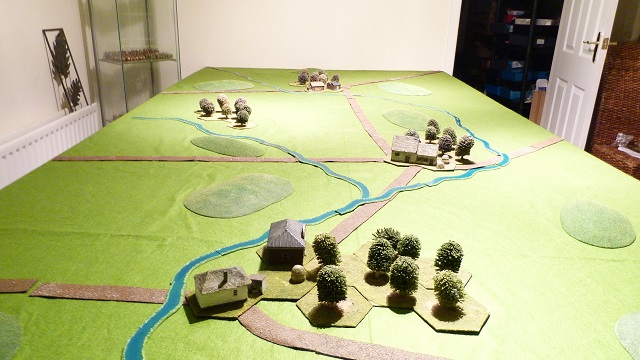 We use cards to deploy visability is 24 inches, and compulsary deployment when you come within  that distance

Movement oputside of 24" is normal move ( 8 inch infantry and 12 inch cavalry), once withing that distance its half speed 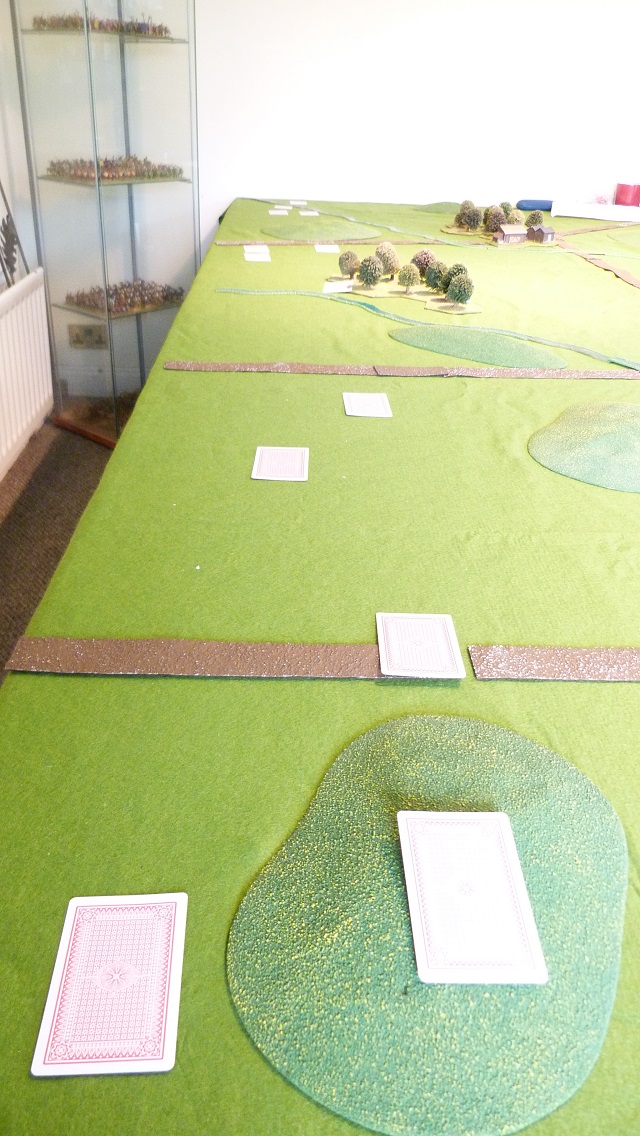 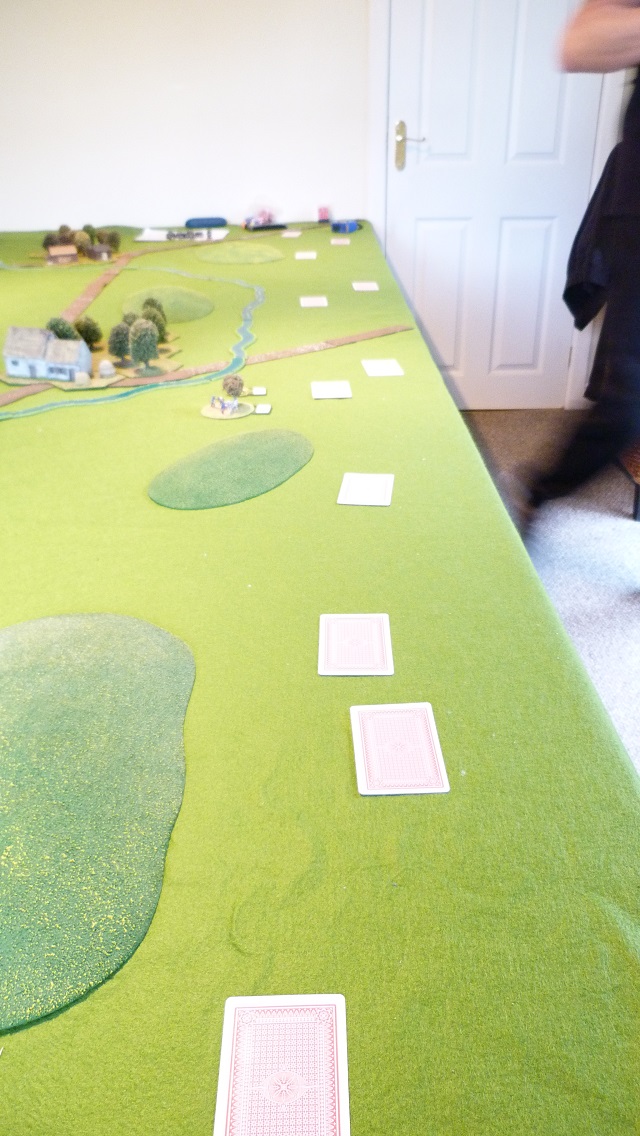 The Austrians deployed on the left hand side of the table in the following order from there left flank, two cavalry brigades 2 and 3, next to them in order infantry brigades 2, 1 and 3 to there rear cavalry brigade1 and Infantry brigade 5, in the centre infantry Brigade 4 and opposite the village on the right flank the 6 the Bavarian brigade and finally on the right the 4th Cavalry Brigade

The Prussians under my mate Simon deployed L-R the 1st and 2nd Cavalry brigades with the 2nd infantry brigade to there right next came the 5th and 3rd Brigade with the Guard brigade and the 4th Line brigade and covered on the Prussian Right by the 3rd cavalry brigade.

The Austrian plan was to hold on the right with the Bavarians an supporting cavalry, a push toward the central village but just to keep the Prussians interested and fixed, in the centre 2 brigades supported by the grenadiers and heavy cavalry where to attack while on the left the valiant 2nd brigade was to clear the village ad woods to allow the two left wing cavalry brigades a free run around the Prussian flank.

Once the fog of war had lifted as the Austrian player I held my ground moving slowly with the Bavarians toward the village and putting down artillery support for the cavalry wing, giving the first cards to the Prussians and move cards appearing gave them a head start 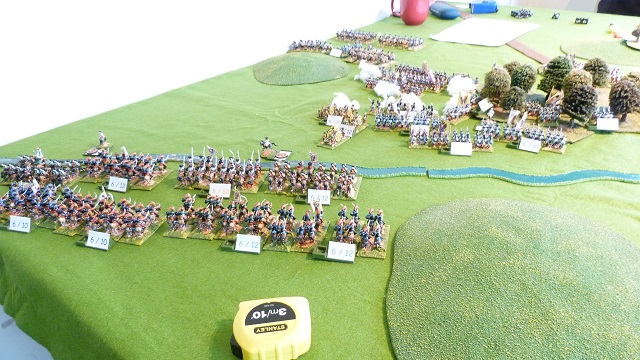 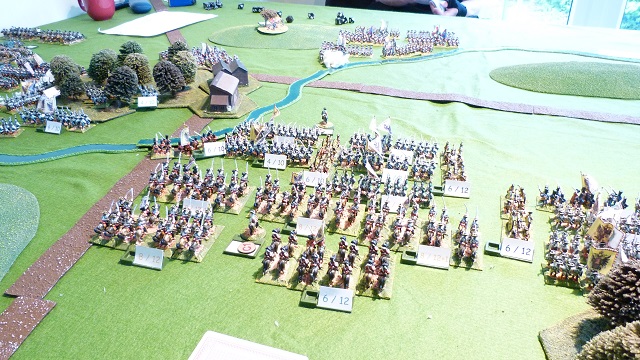 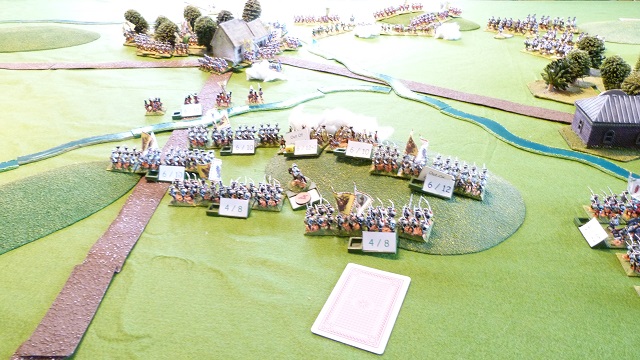 The Austrian Right the Bavarians approach the village and their artillery bombard the Prussian Cavalry, the Austrian Cavalry sit and wait 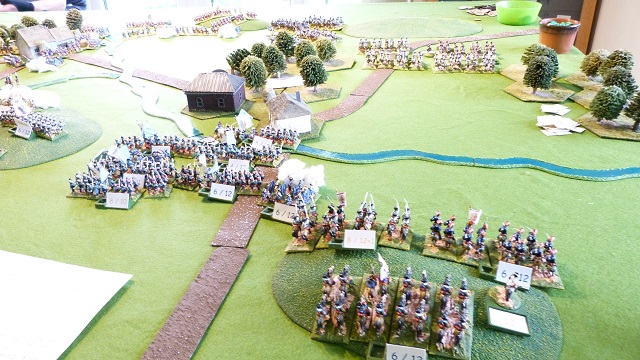 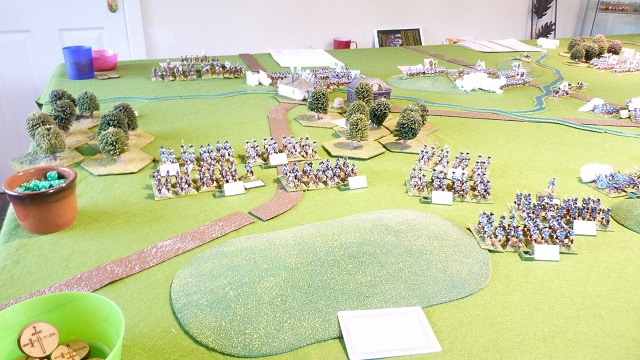 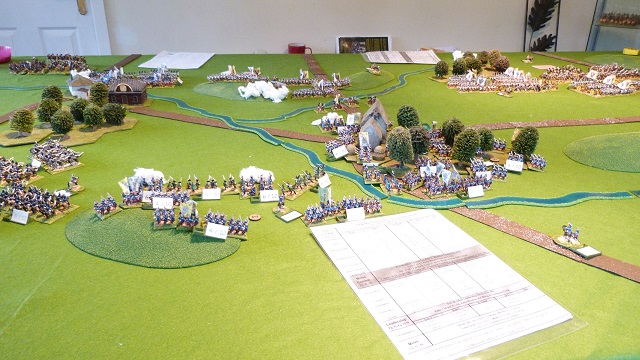 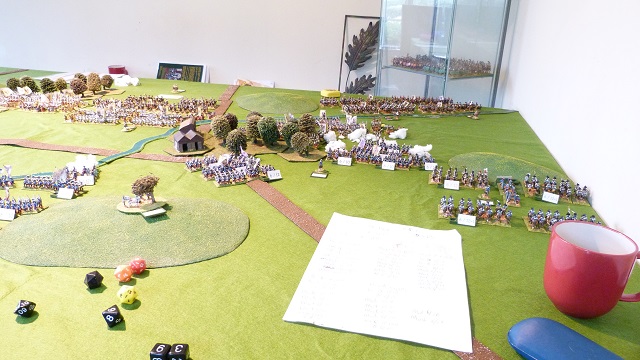 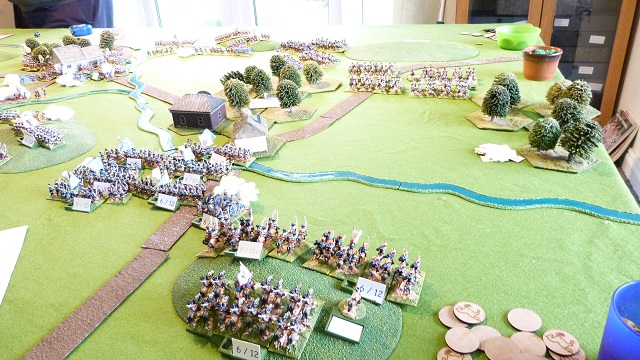 The Guards artillery is destroyed by Austrian Artillery 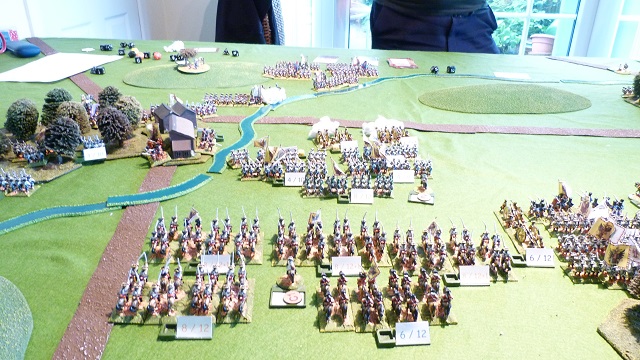 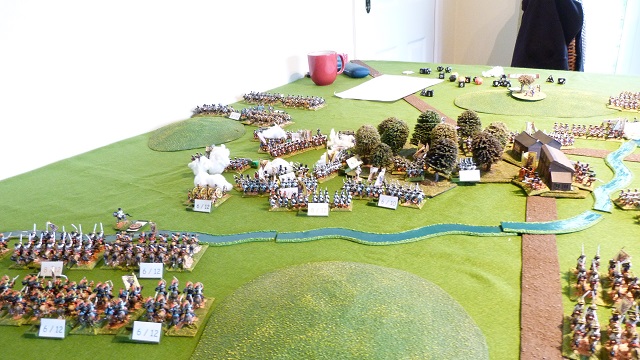 On the Austrian right, the Bavarian brigade started to get into the village and the supporting Austrian cavalry ably supported by a Bavarian battery also crossed the stream.

The Prussian 1st Cavalry unable to get around the flank swung right and toward the Austrian 4th Infantry brigade skirmishing with the Prussians in the village, after suffering notable casualties it seemed a breakthrough might happen. Luckily for the Austrian Infantry, the delay of the stream gave time to try and realign and for some Bavarian Artillery to unlimber in support and the Prussians met by withering fire and artillery shot halted or broke.

Meanwhile, Austrian brigades 1 and 3 came through in the centre and engaged the Prussian Guards behind the stream and the Prussians in the village with artillery, destroying the Guards artillery support. At this point, the Austrian Cuirassiers, Cavalry brigade 1, swung to the left to get around the woods supporting the other cavalry in an attempt to outflank the Prussian. 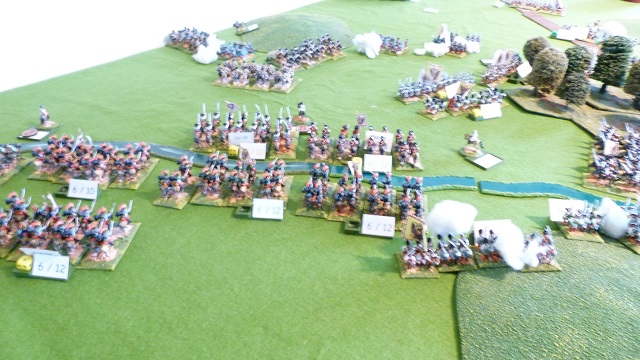 The Kuirassiers add the weight to the left to try and get around the guards holding the stream  you can see 3rd Austrian Brigade using its artillery and a few battalions to keep the Prussians off there flank, just over the stream u can see the card for the reserve Prussian brigade, and the Austrian 5th brigade card 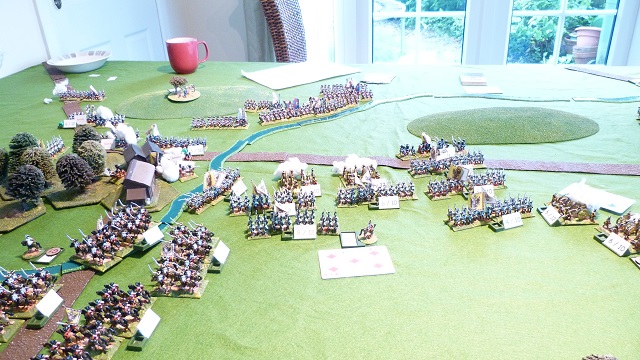 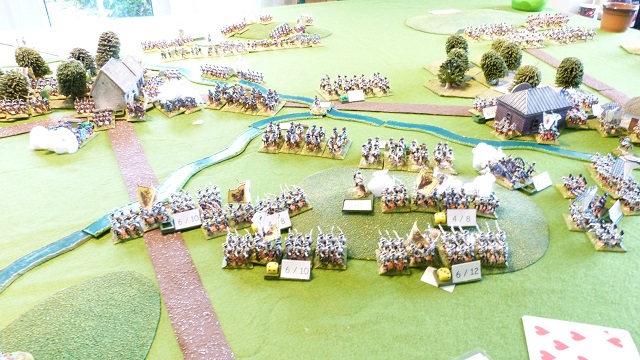 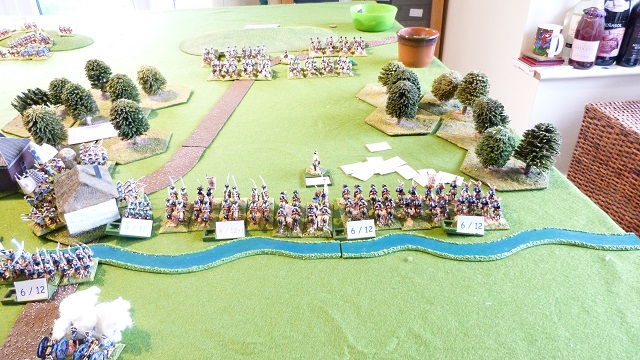 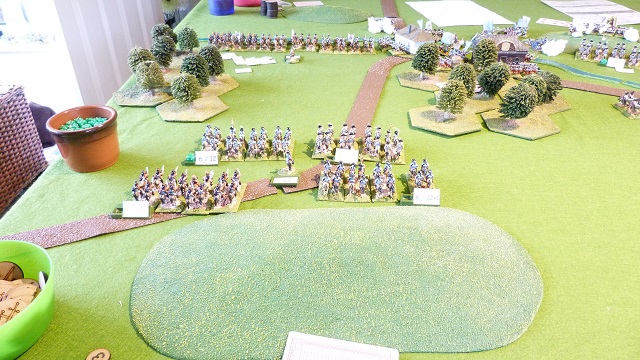 the centre the Prussians holding the village and the 2nd brigade to there left supporting them as th cavalry launch its attack on the Austrian 4th Brigade, you can see the lines of Austrian infantry and artillery of the 3rd brigade as it moves to assault the Prussian Garde 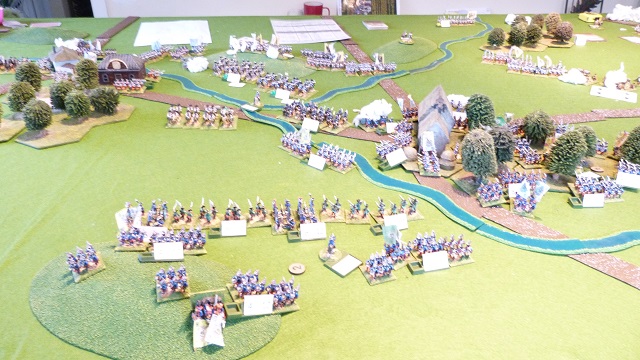 The Prussian Guards and supports, you can see the Prussians running from the woods and Austrian Infantry appearing, look out Frederick! 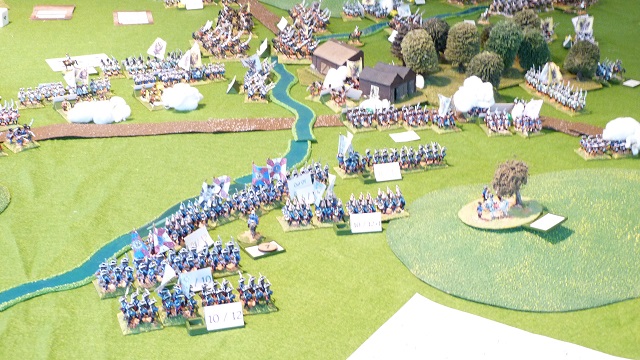 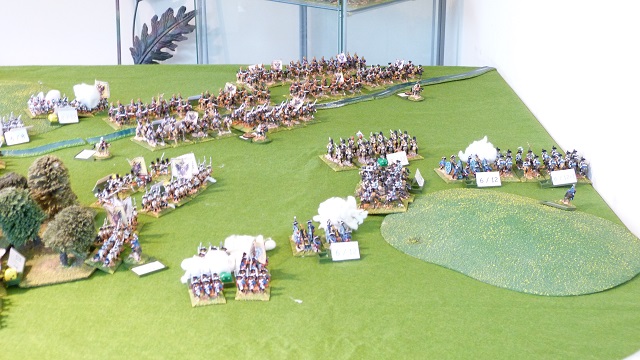 At this point with chits falling thick and fast for the Prussians, the Prussian Right either in rout or about to be swamped by 13 cavalry regiments, the Prussian Guards being mowed down unable to reply to the

Austrian Batteries at cannister range and 2 more batteries moving to support with only the untouched 3rd Prussian Brigade for a rear guard the Prussian Army called a retreat. Another great game. I think the Prussians tied up too much in the central village and deployed themselves the full battlefield and thus no real attacking force to break the Austrians, but like all FoB2 games it had its high and low moments for both sides and was a thoroughly entertaining battle